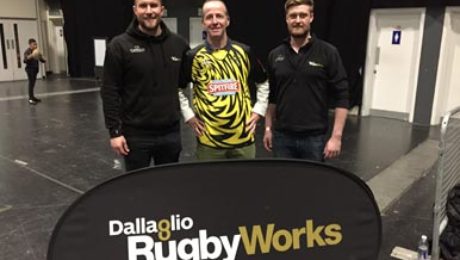 P2S RUGBYWORKS CEO, Fraser Griggs and Head of Coaching, Bob Dayman have spent a week in London shadowing the team at Dallaglio RugbyWorks to see the programme in action and see the inspirational work the coaches do to support the Young People in London who have fallen out of mainstream education.

They attended a number of sessions with Dallaglio RugbyWorks coaches; Mike, Kieran and Phil, seeing them deliver a variety of support to the young people. There were high-octane rugby based sessions and classroom sessions where the coaches helped the attendees with exam preparation and also assisted with CV writing and interview technique. All the sessions were very much focused on the on-going mentoring of the young people as part of their three year journey. Fraser said ‘The week was very much designed to give us a unique insight into the workings of Dallaglio RugbyWorks and the help, support and guidance we got from both the coaches and management of the charity has really set us up nicely to roll out a replica programme in Western Australia.

The operations team in London showed us the evaluation criteria and measurement matrix they use to accurately capture the social impact that the programme delivers. These measurements are essential to demonstrate to our supporters that time and money is being invested to it’s maximum potential in Western Australia.

Bob said ‘The impact that the coaches have on moderating behavior and developing positive self-concept and interpersonal skills was a real eye-opener. The respect shown for each other, their teachers and the Dallaglio RugbyWorks coaches indicated that alienated youth can, and should, be provided with the opportunity to re-engage with mainstream education and/or employment opportunities.’

The visit to London is a key milestone in our evolution. It allows us to maintain our momentum towards the aim of achieving full operational status in 2019 after spending 2018 on developing our infrastructure, funding platform and corporate partnerships.