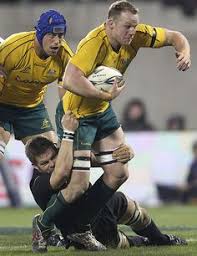 Born in Queensland and brought up on a property between Mount Isa and Townsville, from an early age Richard, a country kid, was used to physical work. He rode horses, mustered cattle and shot the wild pigs that polluted the cattle troughs. This background was to stand him in good stead when he went to high school in Brisbane and took to rugby and found his passion.

Richard has played Rugby Union at all levels: as a school boy international; at state level for the Western Force: from 2007 to 2013; at International level for the Wallabies with his first game in 2008 against New Zealand. He went on to play in twenty three tests for Australia. He played Super Rugby and spent two years in Japan playing for Honda Heat.

Throughout his career his combative and hard working nature made him a formidable player, but Richard sums it all up as “country kid who could chase ball made good”.